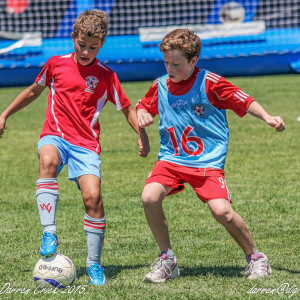 The Woden Valley Soccer Club (WVSC) was formed following an approach from the Phillip Junior Soccer Club to the Melrose Junior Soccer Club late in the 1988 soccer season suggesting amalgamation. Phillip was based in the Canberra suburb of Garran, and Melrose in Chifley. Each club had around 150 players – almost entirely boys. At younger ages they played one another, Queanbeyan and Monaro in Mini Soccer. At older ages they participated in Canberra-wide competition, but numbers rarely were sufficient for more than one team in an age group. Teams thus comprised players of very disparate abilities, and were entered in divisions that failed to test more able players, but overtaxed those of lesser ability. Numbers also made recruiting parent administrators difficult.

There had previously been a third club in the Woden Valley – West Woden, based in the suburb of Lyons, but this had become defunct and been informally absorbed by Melrose. Melrose responded enthusiastically to the amalgamation suggestion, colours were agreed that combined the Liverpool colours of Phillip and the West Ham/Aston Villa colours of Melrose, and after a lot of hard work WVSC was up and running for the 1989 season under foundation President Chris Mobbs. He would be succeeded by Ian Neill in 1991, Kevin O’Hara in 1993, Gordon Carmichael in 1997, Alan Hinde in 2002 and Kim Chapman in 2005.

The larger pools of players and administrators were immediately a benefit, and in 1991 WVSC won its first Division 1 premiership in Under 12s. It would be a decade before similar success was again achieved (also in Under 12s). Three small playing venues inherited from Phillip and Melrose that fragmented activity and offered no facility for operating a canteen hampered growth until, in 1995, the opportunity arose to consolidate from Garran, Phillip District and Chifley Ovals to Mawson Playing Fields. At this facility the club initially enjoyed seven co-located pitches, two of them floodlit. Sustained growth then saw an Australian Rules pitch converted to two further soccer pitches in 1999, and during 2001 these pitches were both floodlit to double night training capacity.

In 1995 player numbers topped 500 for the first time, and by 1997 they had increased to 620. Sustained rapid growth then saw this increase further to 1,180 by 2001. For the past three years numbers have exceeded 1,500. Two initiatives that contributed greatly to this growth were the commencement of soccer for girls in 1996 and for Pee Wees (children turning 5 and 6 in a playing year) in 1997. Girls’ soccer has grown rapidly, to be crowned by WVSC claiming the Under 15 Girls Division 1 premiership in 2001. But possibly the major factor in the club’s spectacular growth was the acquisition of a reputation for being well organized and soundly administered. Substantial sponsorship secured from the Hellenic Club of Canberra in 1999, and continued in ensuing years, has also contributed by facilitating the engagement of a Coaching and Development Manager. The Club’s coming of age was marked by Kanga Cup victories in the Under 12 age group in 2000, and in Under 13s in 2001.