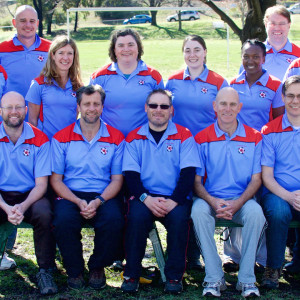 2001 saw the first Woden Valley teams run out to play in senior competitions.  Playing as Woden Valley Soccer Club and administered by the junior club’s committee,  the first season saw a Masters men’s and Masters women’s team introduce the sky blue and red to mens and womens football. It was a difficult start for both teams but we had arrived!

2002 At the end of the 2002 season, Nov 8th 2002, a seperate senior soccer club was created. Woden Valley Senior Soccer Club was incorporated. Bill Wood became the very first President of the club which was now adding other state league sides.

2003 saw Woden Valley enter SL1 women’s football for the first time, in fact we entered 2 teams for the season which turned out to be a successful one. SL1 women’s won the Elaine Watson cup and became minor premiers before losing in the major semi final. The Masters Div 1 side also broke through in 2003 taking out the minor premiership before losing in the grand final.

2004 With the success of the womens SL1 side in the previous year and a committment made to Capital Football to enter a Premier League womens side, WVSSC entered the top level of womens football in Canberra. The mens Masters went one step better than 2003 by winning the minor premiership and grand final to begin a golden era for the team.

2005 was the year that the senior club shook off the old and encouraged by a new direction nationally in the sport, renamed itself to be a football club, WODEN VALLEY SOCCER CLUB Club was born and with it came a new President in John Helgesen and another premiership and grand final win for Mens Masters.

2006 –  A growing unhappiness about the pathway available for our juniors into senior football saw the club decide to enter the men’s SL1 and SL2 competitions this season. Playing at Woden Enclosed Oval and under the guidance of Tony Olivera both teams flourished over the season. The closing months of 2006 saw a lot of activity and preparation for what was to come next season

2007 –  Given the opportunity to apply for one of the brand new Premier League licences, Woden Valley FC was one of only two clubs successful in attaining a full three year licence with Tony Olivera taking charge of the 1st grade side. A change at the helm saw Alan Hinde become President. Success came from various directions in 2007 with the Mens masters returning to the winners circle as minor premiers and grand final winners. We took silverware in our very first Premier league season with the PL 18s as premiers and champions. Our talented SL4 made their grand final as well as our womens masters

2008 –  was a year of real progress in the Premier League with 1st grade narrowly missing a finals spot to finish 5th under new coach Paul Gagetti. U18/PL continued their fine form to make another grand final but our fledgling U16/PL swept all before them winning the Kanga Cup and premiership. Our SL2 men and Masters men made their respective grand finals and our SL5 and womens masters went on to win their finals. 2008 saw the new Mawson club house open with a visit from the Central Coast Mariners on the day.

2009 –  got off to a flying start with both men’s and women’s Premier League side making it through to the finals stages of the Federation Cup with the women contesting the final itself. July saw a WVFC U18s men’s side contest the Kanga Cup final as well. Our men’s masters teams continued to taste success with Div 3 taking out the minor premiership and Div 1 contesting the grand final. Our mens U18/PL side also contested and won their third successive final.

For the women the inaugural year for our U18/Div 1 and Div 2 sides proved successful with both teams making finals. Our revamped Premier league program saw all 3 sides make the semi-finals with the 1st grade side taking out the the clubs first womens PL Minor Premiership which included a record run of 12 straight victories on the way. Both U18/PL and U18/Div 1 made their grand finals with U18/PL becoming champs in the inaugural competition.

After completion of season WVFC were successful in attaining a new 3 year mens Premier league licence for 2010 – 2012 after an well organised and productive off-season program which saw the mens U20s take out the inaugural CF Summer 20s trophy.

2010 –  kicked off with significant changes in personnel.  Pat McCann was welcomed as 1st grade mens coach whilst Marcelo Solar took over the reins of the club as President. Ed Hollis stepped up as 1st grade womens coach. Another good Federation Cup campaign saw the men’s PL reach the quarter finals whilst the women’s PL went all the way to the final for a 2nd year. A highlight of the pre-season was seeing the women’s PL reserves take out the Elaine Watson cup.

Both mens and womens Premier League teams excelled in 2010 with all 3 womens teams making finals(2 making grand finals) and three out of the four mens teams making grand finals. This saw WVFC represented in 5 out of the 7 Premier League Grand Finals on the last weekend. A feature of the mens PL scene in 2010 was the signing of three overseas players for the first time.

A major mark for the club was achieved by Ed Hollis’ womens Premier League side becoming champions for the first time in the clubs history this was backed up by the PL reserves becoming minor Premiers.

In mens state league action SL3 made finals with SL2 as well as Masters Div 3. On the womens side the Crookwell SL2 girls were crowned minor premiers and champions with SL3 women making finals.

2011 –  A rare period of little change in the coaching arrangements preceded the 2011 season. Pre season saw Ed Hollis’s 1st team contest the Federation Cup final again and Vince Taglieri’s Reserves take out the Elaine Watson Cup for a 2nd year. It was just a warm up for a season of widespread success culminating in the womens program securing the ‘Club Championship’ for the 2nd year running. On the men’s side Jason Dunn’s State League 2 side swept away all in front of it winning minor premiers and grand final. The youth men’s Premier league U16s (Minor Prems & Champions) and U18s(Minor Prems) again flew the flag with silverware again secured.

2012 – A new President with a familiar face as John Helgesen moved back in the big chair. Johns push for greater cooperation between juniors and seniors saw a joint board between the clubs established and the development of a new combined web site. On the playing front, it was to turn out to be the end of an era as both Pat McCann and Ed Hollis moved on. Ed’s last season ended with a bang as the 1st grade took out a incredible double with an inaugural Federation Cup win and Grand final win. The men’s Premier league saw the continued success of the international exchange program with Peter Marlette(USA) and Nick Hamiltion(USA) proving their worth as the 1st grade narrowly missed the finals by 1 pt with Peter setting a club record for goals scored at this level. The youth teams left nothing unclaimed as the retiring Tony Olivera’s U18s won the regular reason title and Grand final and Tomas Geyers U16s repeated the feat!